Children too often see themselves as passive receivers of writing subjects and as a result become disengaged and feel disenfranchised.  (Young & Ferguson 2021 p.116)

‘They won’t have anything to write about’ is a frequently heard response to the idea that children might choose their own topics for writing. It is interesting to note, however, that teachers in the Early Years know that very young children have a ready and spontaneous fund of topics to write about. The work of researchers such as Dyson (2003) and Kress (1997) supports these observations, suggesting that even pre-schoolers have the ability to choose their own writing topics with ease. And in author Willa Cather’s view, childhood provides all the material a writer will ever need.

So when and why does this fountain run dry? Do children lose the ability to come up with their own ideas as part of a natural process? It is our belief that in fact this is not the case, but what does happen is that the potential to find their own writing subjects is suppressed by the dominant writing pedagogies used in schools (Young & Ferguson 2020, 2021). To give an example, the generation of ideas, which is how all writers begin their projects, is a process entirely omitted from National Curriculum recommendations. Therefore, the assumption by teachers that it’s their job to supply ideas (because children can’t be trusted to do it) would seem to be officially supported.

Our view is that it is hard to imagine a lower expectation than this of children’s capabilities. While it seems that children in general are not to be trusted to choose their own topics, the most harmful aspect of this kind of thinking is embedded in the particular beliefs about ‘the  socially and culturally deprived child’, most often defined as working-class and in the category labelled ‘pupil- premium’. These beliefs usually include some stereotyped view of the barrenness of a ‘pupil-premium’ child’s life (enshrined in comments such as ‘they only ever sit at home and play on the computer’) that is reductive, dismissive, and has no basis in reality. In fact, as Dyson (2003) and Grainger et al (2003) have shown, the ‘deprived child’ has, like anyone else, resources and life experiences which deserve acknowledgment and representation and which they can learn how to mine as writing ideas (Young & Ferguson 2020, 2021; Young et al in press).

‘Most of my classmates came from low-income families, and many grew up in broken homes, lived with relatives or in foster care. We defined ourselves as a class of writers. I relished our classroom culture and told anyone who would listen – Jacky’ (Leung & Hicks 2014)

Below are examples of just some things children have chosen to write about in schools we have worked with in economically deprived areas:

These children’s teachers refuse to routinely rely on administering teacher or scheme-assigned stimuli but rather focus their attention on teaching children how to generate their own ideas within the parameters of whole class writing projects.

If you remain sceptical, we urge you to read Anne Haas Dyson’s paper, in which she demonstrates how what she calls children’s ‘textual toys’ (which include TV, video, singing, play and the words and images of the adults and children around them at home) can be brought into the literacy classroom and remixed with school literacy practices to create something new.

We can’t give children rich lives, but we can give them the lens to appreciate the richness that is already there. (Lucy Calkins in Young & Ferguson 2020 p.142)

Believing that the experiences of a particular group of children can never be valid and valuable subjects for writing in school has serious and far-reaching consequences. What teachers really mean when they say things like ‘they won’t have anything to write about’ is – they won’t write about things I (and the school) think are legitimate or relevant. They won’t write about things I can control, or they won’t write about things I have a reference to, and the written product won’t be good enough. Such ideas have serious and negative results on children’s writing performance (Young & Ferguson 2021). Teachers’ perceptions of legitimate writing and subjects for writing are the dominant culture in classrooms and are powerful and over-valued, while children’s cultures, and particularly those of the ‘deprived’ child, are persistently and systematically undervalued (Grainger et al 2003). By asking our pupils to leave their own cultural capital, thoughts, opinions and knowledge outside the writing classroom door, we are requiring them to take on an ‘approved’, sterile and mono-cultural identity that doesn’t honour or take advantage of the richness of their lives. Their own voices go unheard. They develop neither a personal sense of selfhood in their writing, nor do they have the feeling of contributing to a collective writing identity (Young et al in press).

Writing is a means for children to develop a sense of self, find meaning in the world, and impose themselves upon it. (Young & Ferguson 2020 p.7)

The teacher’s capacity to choose the writing stimulus means that children are not given any autonomy or control over learning how to personally act out on the world through writing. Instead, they quickly learn the life lesson that writing is to be consumed or imitated, and in accordance with someone else’s desires. This is no less than a form of linguistic oppression perpetrated on young writers, and, according to research (Young & Ferguson 2021), it is happening more than we dare to think, and is part of the reason why so many children leave school mystified, intimidated and believing that writing and being a writer is not for them.

However, it is in our power to change this depressing state of affairs.

In conclusion, we maintain that so-called ‘deprived’ children have, in common with all their peers, valid and valuable ideas for writing, and that we as teachers must show them how to mine their lives and experiences for those ideas. In the many and varied pieces which will result from this instruction, they will draw on their own funds of knowledge, cultural capital and identities, and their compositions will be a rich resource and contribution to the whole writing community of the classroom. 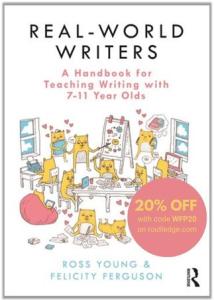